Artifact of the Month

Each month, we will feature a different artifact from LBNL's collection.  We encourage anyone browsing this page who has additional information about the artifact to contact Karen Nelson at [email protected] or at 510-486-4686 so we can update our records. 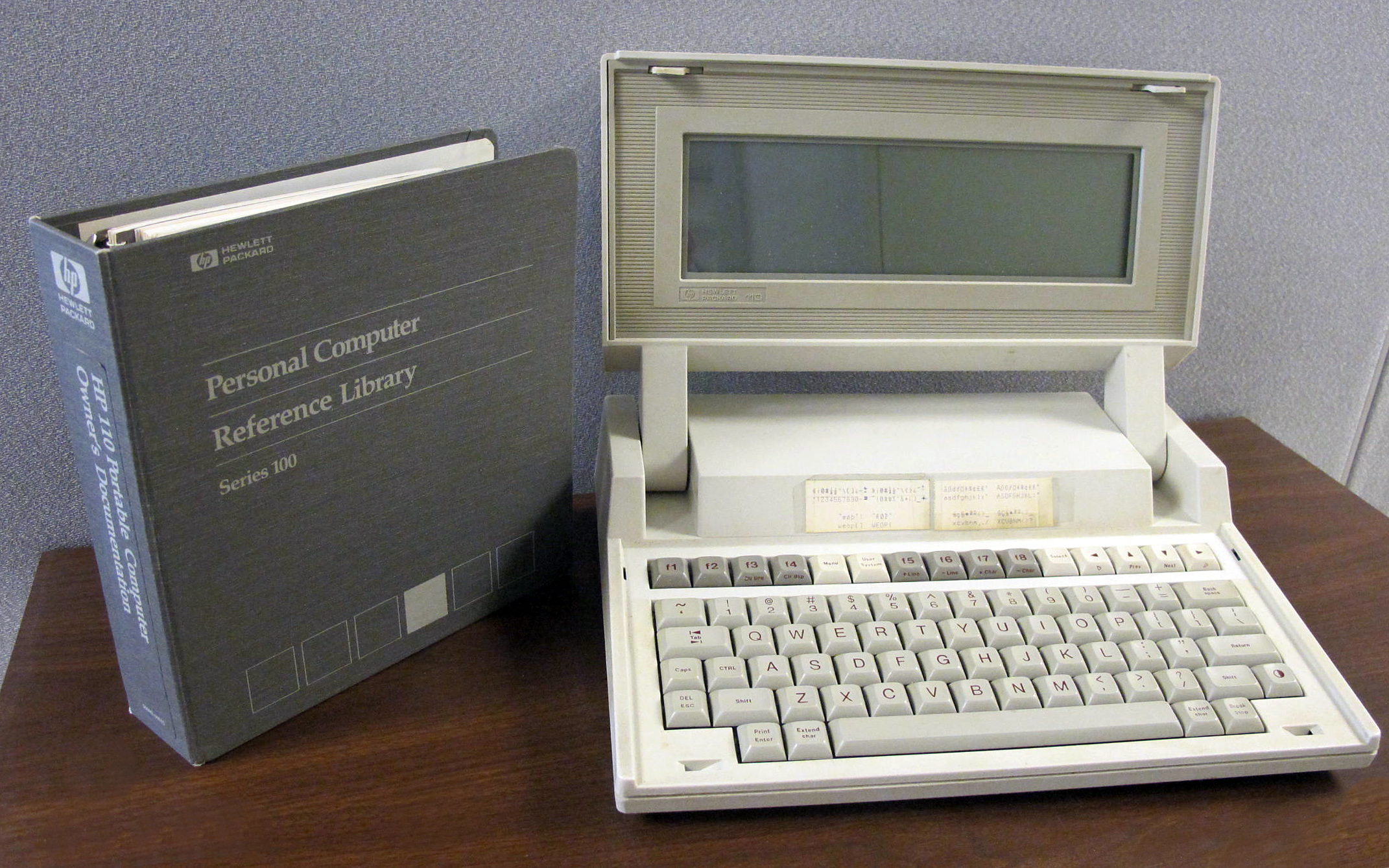 This computer was Hewlett-Packard's first ever laptop, The HP 110 Portable computer measures 10” x 12” x 4” and weighs 8.5 pounds. This computer was bought before public release for $2800. It was donated to the Archives and Records Office by Parker Sherwood.
For more details on this computer, please go here. 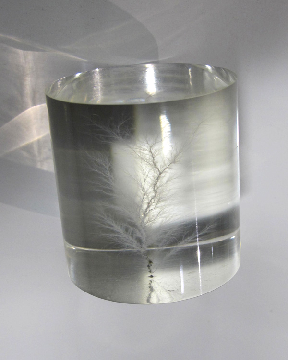 The “electron tree” Lichtenberg Figure was produced in a block of lucite by a beam of electrons from the HILAC (Heavy Ion Linear Accelerator). The electrons initially stop only 0.5 cm into the block, but a small tap after irradiation releases the electrons suddenly and they shoot out like frozen lightning. These coveted blocks were sometimes given to departing graduate students to commemorate their work at the lab.

It was discovered that a highly non-conductive material such as lucite would accept the beam to a depth of ~ 1/2 inch and assume a charge of 1 million rads. The discharge of the electrons is accomplished by a sharp blow with a center punch. The slight compression allows the electrons to discharge to the grounded punch leaving the tracks giving the tree impression.

Lichtenberg figures also appear on skin after a person has been struck by lightning.
http://www.nbcnews.com/health/body-odd/heres-what-lightning-strike-can-do-your-skin-f325006 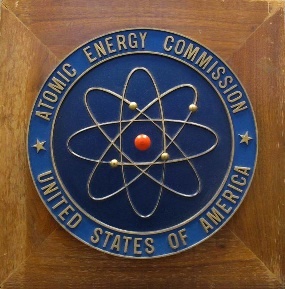 Metal sign (mounted on wood) of the seal of the Atomic Energy Commission (AEC) that once belonged to Glenn Seaborg. Seaborg was appointed Chairman of the AEC by President Kennedy and held the position from 1961-1971.  The sign was found among Albert Ghiorso's items in a Building 71 trailer.  Seaborg and Ghiorso were lifelong friends and colleagues.

Featured Artifact for May 2014 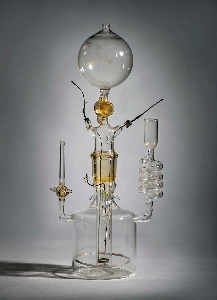 An artifact originally identified as a deuterium generator, constructed about 1939 and used with the 60-Inch Cyclotron.  It has been suggested that the artifact might be a deuterium condenser.  Please contact [email protected] if you know what this artifact is actually called.  The 60-Inch cyclotron began operation in 1939 and produced 16 MeV deuterons. The magnet weighed about 220 tons. In 1939, Luis Alvarez and Robert Cornog, using the 60-Inch, discovered stable helium-3.  Experiments on the machine helped garner Nobel prizes for Glenn Seaborg and Melvin Calvin. 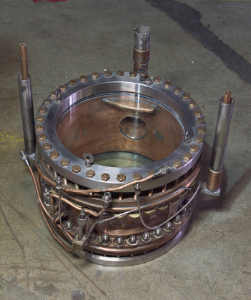 The 10-Inch Bubble Chamber, built in the mid 1950's by Jack Frank, Paul Hernandez, and Luis Alvarez.  In 1968 Alvarez was awarded the Nobel Prize in Physics "for decisive contributions to elementary particle physics ... through the development of the technique of using the hydrogen bubble chamber and data analysis."  The initial design of the 10-Inch was based on the Lab's 4-Inch Bubble chamber and, in fact, construction began on the 10-Inch shortly after the 4-Inch chamber started generating reproducible tracks.  The 10-Inch produced some 600,000 pictures from its turn-on in 1956 to its dismantling the following year so that its magnet could be used in the next iteration of the chamber, the 15-Inch Bubble Chamber, which was completed in 1957.  Plans were already underway by then for a 50-Inch machine which was subsequently redesigned as the 72-Inch Bubble Chamber (see below). 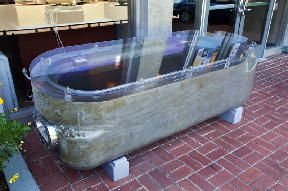 The 72-Inch Bubble Chamber, which was first successfully operated in March 1959.  It took four years and approximately 65 person-years of effort of Laboratory personnel and outside contracts to successfully bring this project to completion.  The total weight of the entire apparatus was 240 tons and the total cost of the project, including the building, was about $2,000,000.  The chamber itself was made of a 6300 pound stainless steel casting.  This was a prototype for a new kind of particle detector and was a crucial link in comprehensive nuclear research systems developed for recording and measuring sub-nuclear particles and events. The liquid hydrogen filled tank created bubbles that followed the path of sub-atomic particles. The tracks were photographed and particles are identified by their distinctive tracks. This bubble chamber revealed 18 sub-nuclear particles previously unknown.  The original bubble chamber was invented in 1952 by Donald A. Glaser, for which he was awarded the Nobel Prize in Physics in 1960. 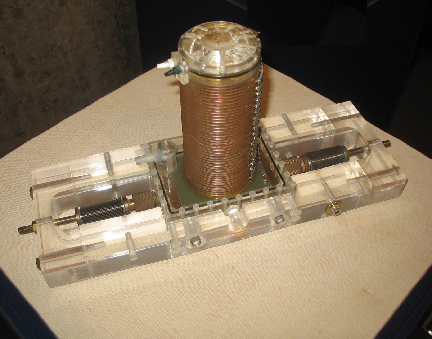 Model of the Time Projection Chamber (TPC), a detector so-named because it identifies particles on the basis of the time it takes their signal to move through a gas. The TPC was developed by Lab physicist David Nygren. TPC's can detect and sift through thousands of particles simultaneously. Invented in 1974, they have become and remain the workhorse of modern particle physics experiments. A TPC serves as the heart of STAR, a 1,200 ton detector system at RHIC, the Relativistic Heavy Collider at Brookhaven National Laboratory. STAR is designed to explore an exotic form of matter called a quark gluon plasma, which briefly existed in the first few microseconds after the Big Bang and set the stage for the combinations of particles that make up our universe today.  For more details, see the following: 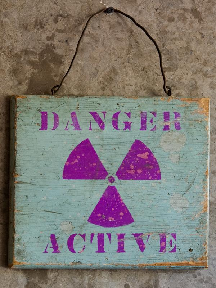 The first Radiation Warning Symbol.  In 1946, as the 184-inch cyclotron was being completed, Lab mechanical engineer Cyrill Orly was asked to design a symbol to indicate the presence of radiation. Orly had seen how the particles burst in a small cloud chamber that he had assembled earlier, and thought that would be a good basis for the design. He developed a center dot with three wings and made the first brass template for preparing these safety signs. At that time there was a listing of different colors scientists used for marking items. Roman violet was used for very precious items, so Orly selected this color for the symbol. For a background color he chose something that would create an arresting contrast, so he chose sky blue. The design is now used internationally. 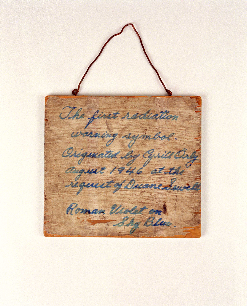 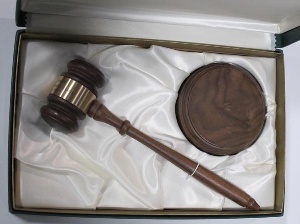 Gavel and block presented to former Lawrence Berkeley Laboratory Director Andrew Sessler by the American Physical Society for his APS presidency in 1998.

Details on Sessler's selction as APS Vice-President in 1995 (http://www.aps.org/publications/apsnews/199601/election.cfm)

Sessler's review of the APS upon his retirement as APS President (http://www.aps.org/publications/apsnews/199905/sessler.cfm) 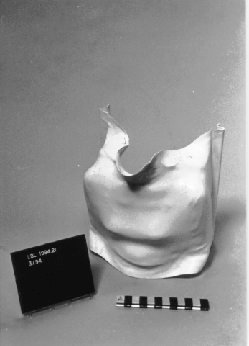 Used in heavy ion radiotherapy at the Bevalac to treat cancer, ocular melanoma, and arteriovenous malfunctions of the brain. The Bevalac could be used to destroy tumors without seriously damaging the tissue in its path. Chest plates such as these were used to protect the surrounding tissue yet allow the beam to strike the target tumor. Chest plates were patient specific.

For an overview of the history of the Bevalac, see http://www.lbl.gov/Science-Articles/Archive/Bevalac-nine-lives.html.

An empty Pyrex glass jar.  The white label near the bottom of the face of the jar indicates "PRESENTED TO GT [Glenn T.] SEABORG AT XMAS PARTY 1956."  The brown label above that contains the following text:

A Weightless Sample of Gr299

Properties:  A worthless metal named in honor of its discoverer, Albert Ghiorso, can be prepared only between the hours of midnight and 6 a.m.  Only one atom of this element has been prepared but it has been conclusively identified as to atomic number and chemical properties by the ion exchange delusion method.  Spontaneously inflammable.  Decays by alpha decay, beta decay, positron decay, orbital electron capture, spontaneous fission and just generally falls apart in a hell of a hurry.  Also has an automatic transmission.

The nucleus of the new element, ghiorsium, is not spherical or football-shaped but has a shape resembling a summer squash.  When news of this reached Copenhagen, Professors Bohr and Mottelson drowned themselves in the North Sea.  Fortunately it is not necessary to solve the complicated equations of rotational motion for this odd-shaped nucleus as it always disintegrates before it completes a single revolution.

The jar was intended as a joke as Albert Ghiorso had discovered 7 elements by 1956.  During his career he discovered a total of 12 elements.

Ghiorso, a nuclear researcher at Lawrence Berkeley National Laboratory (LBNL), died on December 26, 2010, at the age of 95, of heart failure.  Go here for more information on Ghiorso's long and distinguished career at LBNL. 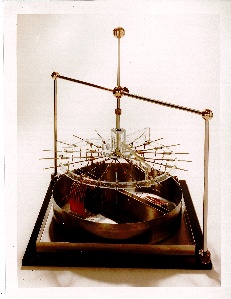 This Nitonol Engine (photo BBC743-1682) was invented by Ridgway Banks, a technician at Lawrence Berkeley Laboratory (LBL) in 1973 (the invention came to be known as the "Banks Engine"). Nitinol, which is an alloy of nickel and titanium, was used to make this wheel-like engine that is fueled by hot and cold water. Engine is non-polluting and capable of converting sunlight, geothermal steam and hot water wastes of nuclear plants into useful energy. [excerpt from the Daily Californian February 23, 1977, from the LBNL Archives and Records Office Historical Artifacts Collection]. For three photographs of Ridgway and his invention from the LBNL Photo Archives, please go here (click on the individual images to enlarge and to see descriptions).

For additional sources, including publications by Ridgway, please see the following: 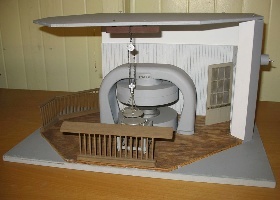 Model of the 80-ton magnet which had been built by the Federal Telegraph Company to power a transatlantic radio link in World War I. It was donated to Ernest Orlando Lawrence for the construction of a cyclotron with an accelerating chamber that was 27-inches in diameter. The 27-Inch Cyclotron was capable of reaching energies of nearly 5 MeV. Because of the magnet’s great weight, Lawrence was forced to move out his space in Room 329 of Le Conte Hall and into the Civil Engineering Testing Laboratory, an empty building adjacent to Le Conte Hall which featured substantial concrete flooring.  Lawrence renamed this building the "Radiation Laboratory," but, in short time, it became known as simply as “The Rad Lab.”  The 27-inch accelerating chamber of the Rad Lab's first cyclotron was soon replaced with a 37-inch chamber and, by 1936, had been used to create radioisotopes and the first artificial element, technetium.

For a series of photographs from the late 1960's showing seven of LBNL's Nobelists posed in front of the magnet (located at the Lawrence Hall of Science), please go here (click on the individual images to enlarge). 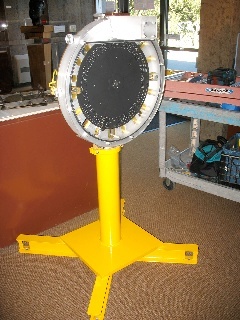 The featured artifact for July 2013 is the Vertical Wheel (5’ high, 4’ wide at base).  The early Vertical Wheel (VW) experiments discovered elements 104 and 105 and led to the last version of the VW shown here. This instrument was used for discovering element 106 named Seaborgium (Sg) after Glenn T. Seaborg. Sg has a half-life of less than a second. It was first created and identified in 1974 in an experiment conducted at LBNL by a team of LBNL and LLNL researchers led by Kenneth Hulet and physicist Albert Ghiorso. The seaborgium atoms were ejected by the 0-18 beam from a remote curium target and carried five meters by a helium jet stream to the surface of the wheel shown here. The wheel rotated periodically to carry the Sg atoms to positions next to seven detectors to have their alpha particle radioactivity analyzed. When the alpha emissions occurred, the daughter atoms were ejected from the mother atoms onto adjacent detector crystals to be analyzed.

For a brief article on Glenn T. Seaborg and Seaborgium, see http://www.lbl.gov/Science-Articles/Research-Review/Magazine/1994/seaborgium-mag.html. 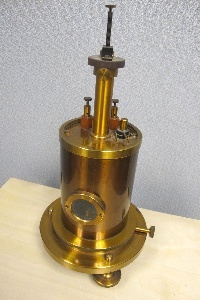 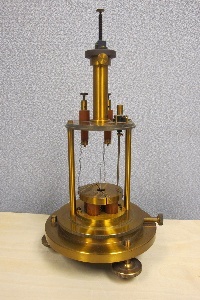 The featured artifact for June 2013 is a Dolezalek Quadrant Electrometer.  The instrument is marked "Cambridge Instrument Co. Ltd. England C 56830" and is also inscribed "1R7821."  The electrometer once belonged to Edwin M. McMillan.  McMillan and Glenn Seaborg shared the Nobel Prize in Chemistry in 1951 for "discoveries in the chemistry of the transuranium elements."  When Ernest Lawrence died in 1958, McMillan became director of the Lab until his retirement in 1973. He passed away in 1991.

For more on Edwin McMillan's life and career, please consult the following – http://www.nobelprize.org/nobel_prizes/chemistry/laureates/1951/mcmillan-bio.html and http://texts.cdlib.org/view?docId=hb4t1nb2bd&brand=calisphere&doc.view=entire_text

Featured Artifact for May 2013 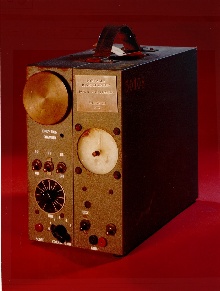 The air filled ionization chamber used a potential of 2000 volts.  Reportedly, the portable counter was used to demonstrate fission of U235.  In the early 1940s, the counter was taken to Washington D.C. by Clyde Wiegand, Joe Kennedy, and Glenn Seaborg and used in a demonstration to Secretary of War Henry Lewis Stimson.

For more information on Clyde Wiegand, who died on Friday, July 5, 1996, please go to the following: