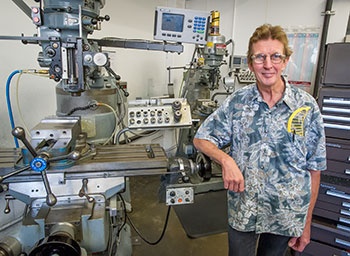 Berkeley Lab’s Users Machine Shop, where scientists build their own parts for experiments at the Advanced Light Source, was once thought of as the most likely place for a workplace accident. Not anymore.

Since taking charge of the shop in 2010, mechanical technician Kurt Krueger reorganized its operations, revamped the safety training program, and imposed his own brand of tough love. “Not in my shop, not on my shift,’’ he says. “It’s that simple.”

The Users Machine Shop is an essential resource for scientists who may need to cut a jig or fashion a fitting for their beamline experiments. The shop has metal lathes, milling machines, band saws, and grinders. Powerful, sharp, and fast, these machines can slice and shave stainless steel, copper, and aluminum; and in the hands of untrained scientists have the potential to cause serious injury.  Krueger, who built race cars before joining Berkeley Lab in 2001, brings to work 40 years of machine shop experience. “If I tell you ‘Don’t do it like that,’” he says, “It’s probably because I’ve seen it done like that before. And the results weren’t always good.”

Before he took over, staffers and students who wanted to use the machine shop were handed a copy of shop procedures, told to read it, and more or less given the keys to run the equipment. Now they have to complete a course with a quiz, keep the place shipshape, and follow off-hours rules that, for example, forbid them to work alone. “It’s like scuba diving. You have to have a buddy,” says Krueger, a scuba diver himself.

As hard-nosed as Krueger can be, this wiry former motorcycle racer has a ready smile and an infectious enthusiasm for the job and respect for the scientists he works with. When he raced motorcycles (“It’s a younger man’s sport”), he volunteered for safety squad and literally carried around a book of rules.  Now he keeps the shop procedures in his back pocket. If challenged, he had a ready answer: “Let’s read it together.”

Krueger knows he has something to teach and prefers friendly persuasion to “assuming the authoritarian position.”  He has earned the respect of the scientists who use the shop, and received a Spot Award earlier this year in recognition for the safety culture improvements he has championed. The award is good, but Krueger also finds a deep satisfaction with his mission: “I like to do things that promote longevity,” he says.