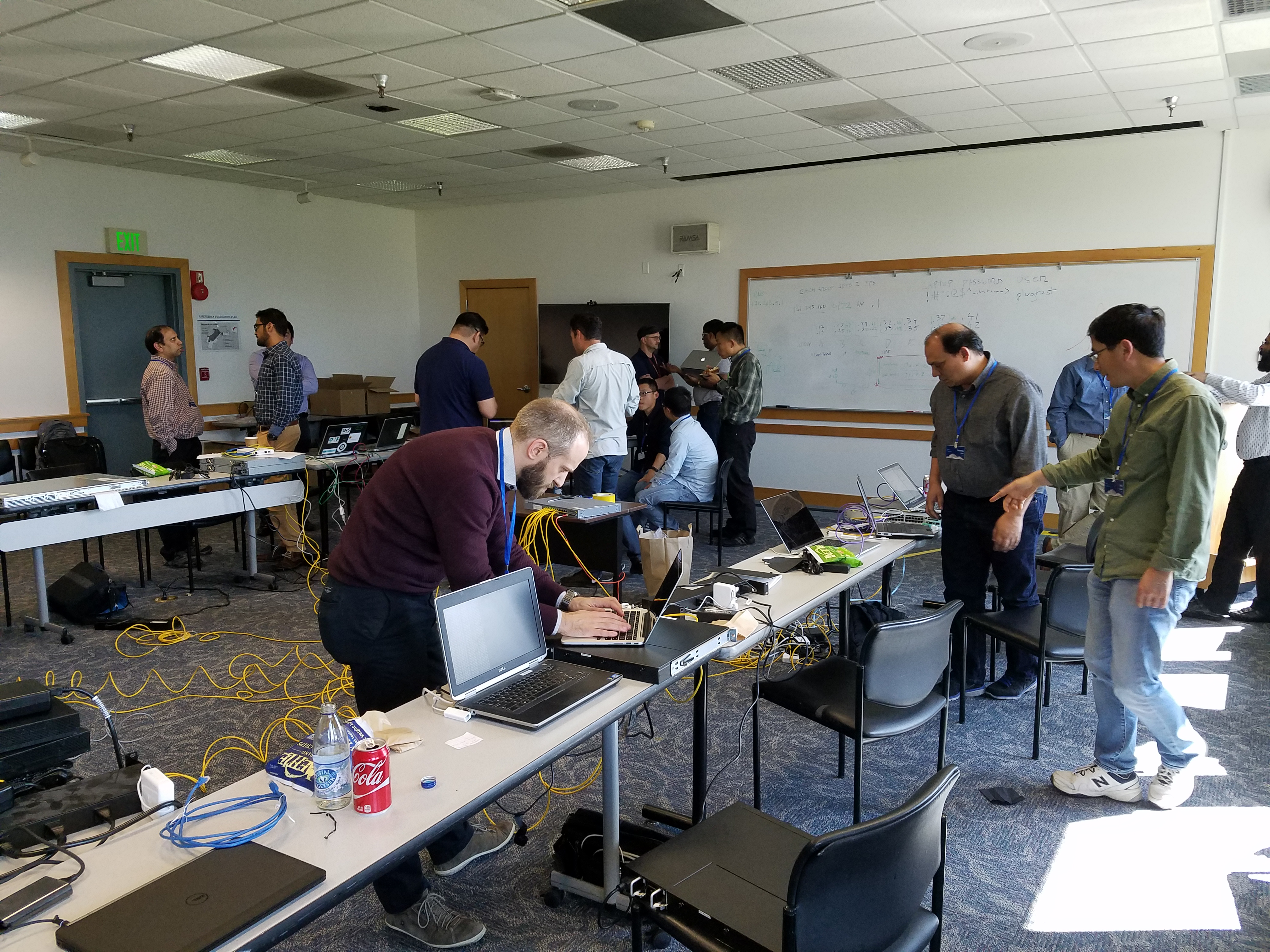 In a real-time demonstration, seven vendors of network equipment came together to successfully test the interoperability of FAUCET, an open-source SDN (software-defined networking) controller. The March 30 event was sponsored by Google, LBLnet (Lawrence Berkeley National Laboratory’s internal network) and ESnet, the U.S. Department of Energy’s high-speed international network managed by Lawrence Berkeley National Laboratory. Simeon Miteff, an LBLnet network manager in IT, was the lead organizer of the event.

The demonstration was organized to sustain momentum for SDN -- an emerging technology that decouples the network control plane from the actual data which flows across the network on the data plane. By doing so, SDN introduces the concept of programmability into the network, allowing application owners and network operators to customize network software to meet their needs.

For SDN to realize its potential, it must be interoperable among network vendors while bringing different (and advanced) capabilities to network operators. FAUCET enables verification of this interoperability through a common API, OpenFlow. FAUCET, originally developed at REANNZ and the University of Waikato in New Zealand with the support of Google and others, was created to bring the benefits of SDN to a typical enterprise network and has been deployed in various settings.

The demo was run on switches running Openflow v1.3.x. Designed as a drop-in replacement for a non-SDN switch, FAUCET-controlled hardware provides additional SDN based functionality as well (for example, policy based L2/L3 forwarding and multi vendor stacking). Once each vendor had demonstrated support individually, multi-vendor control and dataplane interoperability was demonstrated by building a virtual switch composed of switches from each vendor, under the control of a single FAUCET controller, able to pass real networking traffic across the room (and therefore a real network).

This demonstration of multi-vendor interoperability creates a collaborative environment between vendors and demonstrates maturity of the Openflow substrate as well as the FAUCET SDN controller, as discussed in a 2016 technical paper on deploying FAUCET, coauthored by Googlers Josh Bailey and Stephen Stuart, who supported the event.

FAUCET has been deployed at multiple organizations across the world  and recently was used to host the NZNOG 2017 meeting in New Zealand.

“This live interoperability demo led to some great technical conversations with the vendors, and the enthusiasm of all the participants made this both a productive and enjoyable gathering,” said Simeon Miteff, an LBLnet network manager who was the lead organizer of the event.

Josh Bailey, a Google software engineer who is a technical lead on FAUCET and co-author of the paper with Stuart, found the hands-on demo useful as he made the rounds of vendors, answering questions and helping to debug the installs.

Bailey maintains an active blog on FAUCET at https://faucet-sdn.blogspot.com/.

“Multi-vendor interoperability is critical for network providers like ESnet to get confidence about deploying SDN software and technology, while not being subject to vendor lock-in,” said Inder Monga, director of ESnet and long-time contributor to SDN efforts in the industry.

Vendors participating in the demo are (in alphabetical order) Allied Telesis, Cisco, HPE (wired and Aruba wireless products), Netronome, NoviFlow and Intel OpenVSwitch with DPDK. This group plans to hold such interoperability gatherings at a yearly cadence, while continuing the momentum to add new features to the FAUCET open-source software.